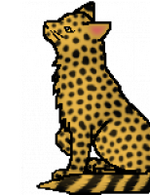 Hi, welcome to HollyClan(Warriors Cat) Wiki! Thanks for your edit to the File:Medicine cat female12.png page.

Of course, Cheetahstar123! I've got your GorgeTribe cat name, so all I need now to add her to the GorgeTribe Alliances is her:

Trained Hunter(like a Prey-Hunter in the Tribe Of Rushing Water; these cats fetch prey for the Tribe, but still do small amounts of fighting, rarely).

Trained Fighter(like a Cave-Guard in the Tribe Of Rushing Water; these cats protect and defend their Tribe's cave, and do most of the fighting when rogues, loners, kittypets, etc., and their rival Tribe attacks).

Nurser(Same as a Kit-Mother in the Tribe Of Rushing Water, or a queen in the forest Clans; these she-cats care for their kits in the Nurser's Den until their young become either Trainee Fighters or Trainee Hunters(apprentices, or To-Bes. You must either have another User RP your mate if you're a Nurser, or RP your mate yourself).

Senior(Same as elders in the forest Clans, or elders in the Tribe Of Rushing Water; former Trained Hunters or Trained Fighters, now retired to the Senior's Den).

Kit(Same as a kit in the forest Clans, or a kit in the Tribe Of Rushing Water; a cat too young to become a Trainee Hunter or Trainee Fighter, being looked after by its adopted/birth mother in the Nurser's Den).

Thanks for Sprinting Cheetah's appearance info, Cheetah. Now all I need is her rank, and I can add her to the GorgeTribe Alliances.-Kittycat79Kitties Rule! 03:06, February 10, 2011 (UTC)

Yup, Cheetah, that's enough info for Cheetah That Sprints Over Plains (Sprinting Cheetah or Cheetah). I'll add her to the GorgeTribe Alliances in a moment.-Kittycat79Kitties Rule! 22:43, February 10, 2011 (UTC)

Okay, Cheetah, I've added Cheetah That Sprints Over Plains(Sprinting Cheetah or Cheetah) to the GorgeTribe Alliances in the Trained Hunters: section. You are now free to begin RP'ing in the 'Chat!' section in the article. After you have RP'd one section, sign it with 4 ~ then click the 'Publish' button. For example: *Cheetah That Sprints Over Plains pads into the territory, hunts a mouse then walks back to camp with it swinging from her jaws* Cheetahstar of SprintClan. That is an example of one of your posts. Hope you enjoy being a member of GorgeTribe! :D-Kittycat79Kitties Rule! 23:01, February 10, 2011 (UTC)

Retrieved from "https://hollyclanwarriors.fandom.com/wiki/User_talk:Cheetahstar123?oldid=4262"
Community content is available under CC-BY-SA unless otherwise noted.